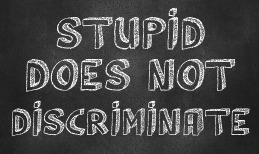 Stupid does not discriminate (sorry EVERYONE). It’s not a gay thing or straight thing, a black thing or white thing, it’s not even a Christian or Muslim issue (I know, SO crazy). It is, by it’s very nature, a human (that means you & me) condition, and yes, it is contagious (more on that to follow). My dear peeps. I hate to be negative in my blogs, especially towards a community I strive to support and so openly belong to, but when I see stupidity, that poignantly goes beyond simply damaging the image of the individual committing the “stupid” act, I feel obligated to point it out, and in this case apologize. WE ARE SORRY. I was reading some positive and awesome articles and looking through happy photographs and video of this past 2014 Miami Beach Gay Pride event. An event I was asked to participate in but with heavy heart had to decline because I was filming an amazing new HGTV show I’ll be part of (I am really busy okay! I’m also not above a selfless plug, sorry). While perusing the images, I came across this video of a scantily clad (except for the heavy damaging boots), gay individual (I think it’s safe to assume) dancing on top of a parked City of Miami Beach Police car. He was being watched and cheered on by a very large crowd.

Here’s what stood out to me, and I’m no detective….but I call it how I see it. First of all, the police car was sporting rainbow colored stripes, a defined symbol of “gay pride”. The second obvious observation was the amount of damage this dancer was doing to this police car as he pranced from one end to the other, over and over again. Finally, I observed this silly, silly crowd, who simply cheered him on — or worst video taped it with their phones (the modern world is very into capturing moments, we get it). I wasn’t totally sure what I was looking at. Was it part of the entertainment and staged for the crowd? Was this a real police car? I don’t know! I was however instantly concerned with how this would look to the rest of the world once it went viral on the internet (which I knew it would because I’m VERY INTUITIVE that way). So the video went up and out into the world and I got the answers I was looking for. The police car was indeed owned by the City of Miami Beach Police Department, which is honestly so upsetting. Because I am very proud of this Miami Police Department. They’ve made a conscious and continuous effort to support the gay community and have in my eyes been a leader in progressive police departments. This was just one of the many noble community policing efforts made by this department to integrate their ranks into and reach out to the diverse community they serve. Personally, I know several openly gay police officers on the force, and have met their forward-thinking police chief and commend them all for their advances towards equality (especially in a field thats not typically known for such advances). My inquiries into the incident also confirmed that the police car was severely damaged and that city funds may not be available to repair it. A symbol of the departments acceptance towards my community may be gone forever. I also learned the police department was actively seeking information on who the individual filmed damaging the police car was (I’m assuming they will be filing a criminal complaint). I soon received information from friends that this knucklehead observed damaging the car had actually posted it on his social media (GENIUS). Apparently he was surprised by the negative comments the video was getting online. He felt he had done nothing wrong, and that he had not actually done any damage to the car, and because he had not been arrested (yet) he couldn’t have been doing anything too criminal (again sometimes “stupid is just stupid”).

Now back to my original premise that “stupid does not discriminate”. We’ve seen stupid actions by, without a doubt, all segments of society. Ok maybe a higher percentage by college students and the US Congress, but thats a whole other sociological study I’m not going to delve into (at the moment). Again, stupid does not discriminate (so be careful!). It’s a human condition. When it’s confined to an individual, I’m okay with it, as it only damages that persons reputation. If you want to look stupid and you can do it without hurting others or damaging others property, go ahead. I wouldn’t be writing this if he had been dancing on the roof of his own car now would I?! My main concern is two fold: First when the stupid action is within a culture or group that is still striving for acceptance and equality. Those actions can and will likely cause damage beyond just individual and shine an even harsher light onto the group. Actions like this, splattered all over the internet, are used as evidence by those “wrongfully” looking to suppress any groups acceptance or equality. It is even more concerning when conducted at events like Gay Pride, that are celebrations of the progress made, and even more upsetting when directed against organizations or agencies, such as the Miami Beach Police Department, that are striving to assist in these efforts. Come on people that police car was not there as a symbol of oppression but as a symbol of acceptance and yes WE f—-ed up that symbolism. Let’s not be our own worst enemies! Right when this particular “Gay Pride” is gaining momentum and becoming known as a beautiful cultural event enjoyed by such a diverse crowd, we are forced to take a step back because of our own actions. WE DON’T HAVE TIME FOR THIS. I for one, want to move forward, and I want my community to come with me. And if the police department of that community is supporting me ALL THE BETTER. Why on earth would anyone want to harm that relationship? It’s crucial to us. It’s critical to us. We need to maintain it and grow it, not risk it because you think it’s cute (it’s not…) to dance around naked on top of a cop car. Are you out of your mind?! My second point is that “stupidity can be contagious”. What I’m talking about has been studied by psychologists and has shown that groups or mobs react in interesting ways when exposed to stimulus. What they’ve shown is that the majority of the crowd (lets call them sheep, baaaah, babes, baahh) will follow the actions of the vocal or dominant few (lets call them wolves or sheep dogs). When groups turn into mobs and turn violent, video has shown that the majority of the crowd will only act once one or more in the crowd (the wolves) act out violently. The same has been shown most dramatically in recent surveillance video of subway platforms where a victim falls onto the tracks and either no one moves to help or only once one (the sheepdog) moves to help the rest follow. This happens over and over again in videos showing an individual or group attacking an individual while massive crowds (the sheep), which could certainly intervene and stop these actions, don’t. In this particular video from Miami Beach I’m appalled as I watch the crowd, not understanding the significance and long term ramifications of this, simply watch or worse, cheer on these obviously “stupid” and illegal actions. A mob of sheep? Where are the “sheep dogs” conditioned and wired with the moral desire to protect the flock (even if it’s from themselves)? Come on people, do we really have to wait for the police to help define what’s right and wrong or can we take it upon ourselves and our inherent moral compasses to promote, sponsor, or entice what is right, and fight against what is wrong? Take race, religion, sex, sexual orientation and all other separating criteria out of the mix and simply react to what your gut feelings tell you are right and wrong. It’s not rocket science, it’s the most basic human condition, and we all have it. The question is, what do we do with it?